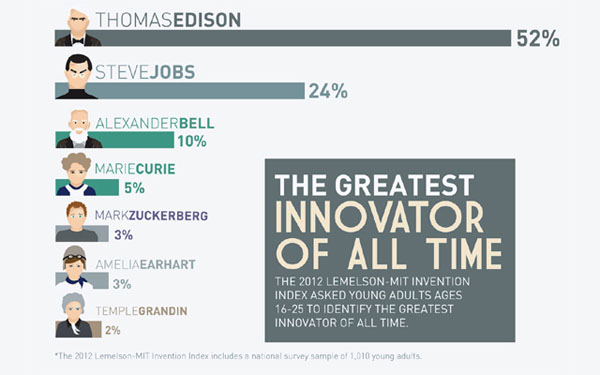 Steve Jobs has been named the second greatest innovator of all time, behind Thomas Edison, in the 2012 Lemelson-MIT Invention Index.


These two figures are doing so well on the list because young adults feel that the technology Jobs and Zuckerberg helped create greatly influences their daily lives. For example, 40 percent of respondents said they couldn’t imagine their life without a smartphone or a tablet.

However, the respondents aren’t so sure whether they’d try to become innovators themselves. 45 percent said that invention is not given enough attention in their school, and 28 percent said their education left them unprepared to enter the fields that lead to innovation, namely science, technology, engineering or math.

“This year’s survey revealed that less than half of respondents have done things like used a drill or hand-held power tool, or made something out of raw materials in the past year. We must engage students in these types of invention experiences as well as provide a strong STEM education to drive future innovators,” said Leigh Estabrooks, the Lemelson-MIT Program’s invention education officer.

The Lemelson-MIT InvenTeam Initiative grants teams of students up to $10,000 each, enabling them to pursue a yearlong invention project addressing real-world issues.