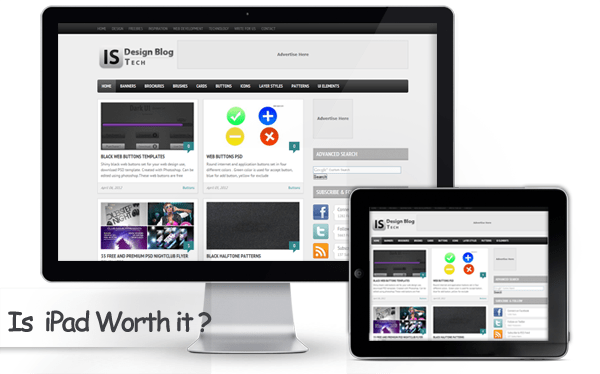 The iPad is truly a revolutionary device; it provides the user with an extraordinarily simple interface coupled with extreme portability. It accomplishes what no other device before it could, which is position itself as the new frontier for technology. What truly is fascinating however is how it created a marketplace when there was none to begin with, when people are asked if they want a tablet, they simply remark with “I want an IPad!” However, with all its features are you as a person willing to adopt it into your everyday life?

Do you have a laptop? Is it old? Is it heavy? Do you have a desktop? If you have just a desktop, I would recommend to you, sure get one, no reason why you shouldn’t. By having an IPad you replace any need of yours that a laptop could have provided. The iPad can be used to easily manoeuvre the web, and store information. However its biggest inconvenience i s the inability to multitask properly when cross referencing, and not supporting flash on websites.

Although a pain to deal with, it’s certainly not a deal breaker for most people. And this is because of the apps, making it much easier to use than a laptop on many levels. The ability to download and use apps on an iPad is what sets it apart significantly from a laptop. There’s no fear of downloading the wrong object or acquiring a dangerous virus from simply trying to implement a new program you came across one day. Downloads are heavily moderated and inspected prior to release to ensure that users are getting the best programs and apps possible. Aside from this however, any app you get on your iPad is going to come from the App Store, which means no competition for your dollars and prices are going to be set a little higher than normal due to covering the cut that Apple receives from selling something on the store.

Aside from these nuances, you can expect an excellent device visually. The image is extremely vivid and sharp which makes for an easy experience on the eyes. Videos play in crisp 720p and the device never feels to hot even when running for a lengthy amount of time. It’s very nice to use in bed because it takes up considerably less space than a laptop. Why don’t I have an iPad? Because I don’t have a need for it.

Like many of you, I wonder too if I need an iPad for myself. But then when I look at what I have I know that the iPad just isn’t for me yet. I have computers everywhere I go and with the assistance of Gmail and Google Cloud I’m able to work at home and resume work where I left off at the office. My laptop is quite cumbersome but once I set it down, it feels like a portable desktop. Is it practical? No. But it works for me and that’s all that matters. The thing I miss the most from not having an iPad is probably the Facetime. Facetime is truly an incredible application. It allows me to video-chat with family across the globe and see their expressions and their eyes light up when they speak with me. What I need to do is get the iPod Touch. But I have a Google Nexus which does a good job of being a phone with a bunch of apps that I use occasionally. I like the iPad and until my laptop dies, which should be in about 2-3 years, I’ll probably be using this for quite some time to come.