Most of us are satisfied with simply visiting a nearby community pool a few times a year or going to the local health club when we want to go for a swim. But other people don’t have to pick and choose when they go swimming because they have the luxury of having a pool right in their very own homes.

And then there are the few people–mostly the rich and famous–that have taken pool ownership to the extreme. They reject the idea of a traditional backyard pool and instead opt for a pool that is elaborate, expensive and perfectly over-the-top.Here 5 examples swimming pools in homes that are beautiful, luxurious and unlike anything that you have ever seen before.

This article is written by Brandon Mercury, who is a writer for YourLocalSecurity.com and a contributor to the In Good Measure blog. He enjoys writing about wellness and home improvement.

The most expensive and luxurious private pool in America is owned by the Kitchukov family of Gilbert, Arizona. The pool was designed and constructed by Arizona-based development company Red Rock Contractors. It is 10 times larger than the average backyard pool and took 5 months to construct. Inspired by the pool at the Mirage in Las Vegas, the $1 million pool is equipped with fountains, waterfalls and a 15-foot waterslide. The pool is even operated by a state-of-the-art control system that allows the family to control the pool’s temperature and the lighting through any web-enabled device. 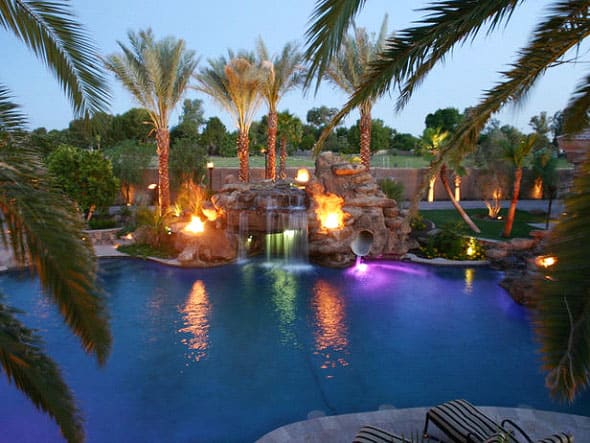 The Hearst Castle is located in San Simeon, California and is home to two luxury pools that are among the most well-known in the world. The 60,000 square foot home was built between 1924 and 1936 for newspaper giant William Randolph Hearst. The entire home–including the famous pools– were designed by famed California designer Julia Morgan. Today, the home is estimated to be worth more than $30 million and the pools would be difficult to price because of their intricate design and extravagant materials. The Neptune pool is located outdoors and measures 104 feet by 58 feet, and the Roman pool located indoors is slightly smaller. Both of the pools are covered with thousands of gold-lined mosaic tiles and works of art crafted by Italian artists. 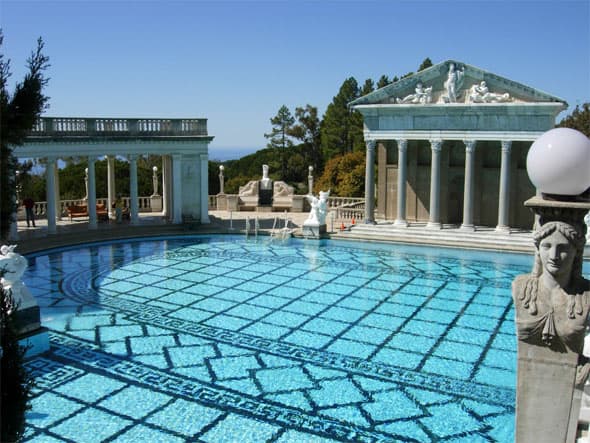 The Dallas mansion of billionaire banker Gerald Ford is 30,000 square feet and is the second most expensive residence in Dallas. And it is home to one of the most elaborate indoor swimming pools in all of Texas. Several pure crystal chandeliers hang above the pool and the pool itself contains stunning wall sconces and blue tiled pattern walls. 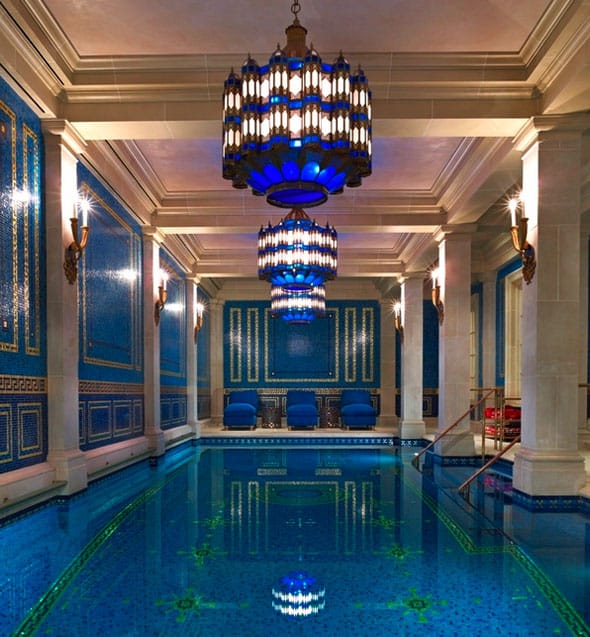 Updown Court is located in Surrey, England and is one of the most expensive homes in the world. The estate is situated on 58 acres and is larger than Buckingham Palace with 24 bedrooms and 23 bathrooms. The home was originally built in 1924 but was severely damaged by a fire in 1987. It was then purchased by British developer Leslie Allen-Vercoe who hired Arizona-based architecture firm John B. Scholz to redesign the home. The construction process was completed in 2006 and boasts some of the most elaborate pools in the world. The home actually has 5 pools, 2 of which are indoors. The indoor pools are by far the most elaborate and were intricately designed and feature thousands of hand crafted mosaic tiles. Each pool is the size of a regulation Olympic pool and has an accompanying spa. 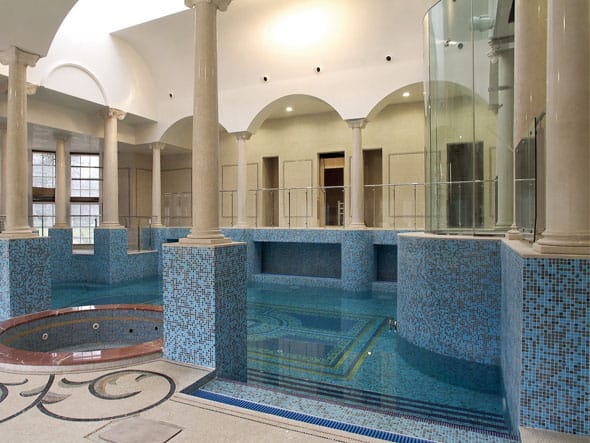 Brian and Kim Ross–who operate their own real estate development company–own a 40,000 square foot home in Cortland, Ohio. The Ross residence is home to one of the most elaborate (and the most expensive) private pools in the United States. The indoor pool was designed around a jungle theme and showcases a rock cave, a waterslide and palm trees. 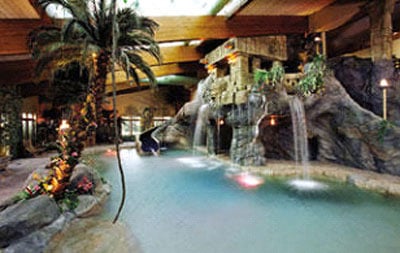