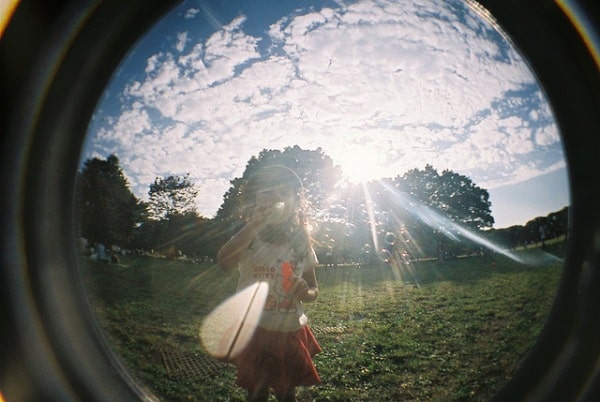 I fell in love with photography in my teens. I received an old Practica for Christmas and put it to use right up until I purchased my first SLR in 2008.

The SLR changed my life. I’ve been documenting all our family memories on it for the past four years, snapping away and loving the ease at which we capture our memories.

I thought I’d left analogue in the past, along with all the faffing and fuss of setting the camera up and ready. That was until I discovered Lomonography.

A new cult of analogue-lovin’ folk are out there, snapping away without a care in the world. The cameras are simple with basic settings. There seems to be a motto that the ‘Lomo’ group live by, “Don’t Think, Just Shoot”. I decided to give it a go.

I ordered myself a LC-A+ RL and started to snap away. This camera is part of the ‘Lomo’ history. Apparently two students in Vienna, Austria stumbled upon a compact-sized Russian camera called the ‘Lomo’ Kompakt Automat (LC-A).

Its trademark vignette shadowing, light-leaks, and saturated colours shocked them and the photos attracted a cult following. I began by just snapping away at the local park first. They weren’t lying when they said it was easy. The classic, from the hip shot is always a winner too. It’s so simple that even my six year old could use it.

The main part that puts me off analogue is the development process. I’ve got used to the upload ease of a digital SLR. Never worrying about paying for or picking up photos is a big pro for my on-the-go lifestyle.

However, when I went to my local developer to get my photos done I felt like a child again. Waiting for them to be produced and not knowing if my photos were stunning or awful gave me a rush as I opened the envelope. There were a few blurry ones and the odd one was unidentifiable, but all of them had their own charm. Bright colours and the fun fisheye lens gave the photos character and edge.

I can see why so many people have fallen in love with them.

They won’t take the clean shots that your digital camera or phone will, but I’ve learned there’s something more satisfying with the pictures; something more fun. Posing in Prada sunglasses with my children or snapping me and the girls at coffee never looked so good. I think I have a new found love with photography.

Louise Blake is an on-the-go mum who spends most of time running around with her girls and having fun! She works as a design account manager for Valley Optics and loves all aspects of architecture and home design. She loves snapping family memories on her digital SLR.