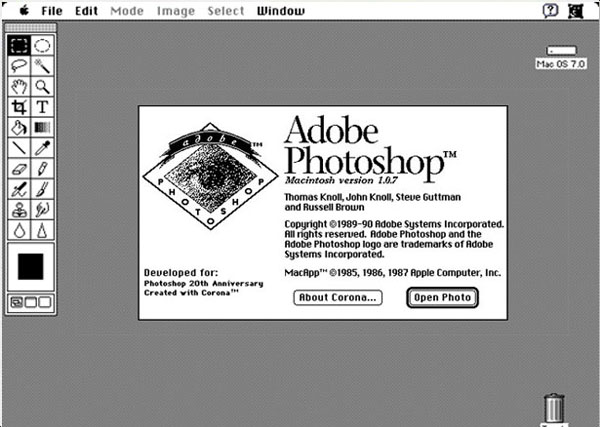 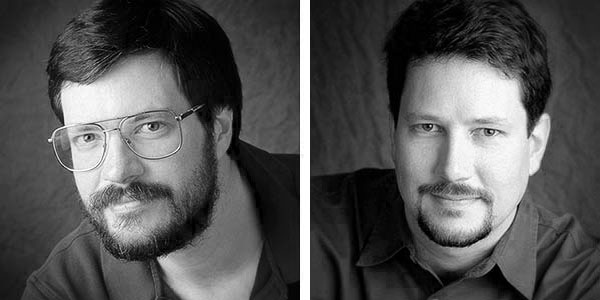 Photoshop is the most popular and the best selling editing software for the last two decades and still the best .When someone talks about design,photography,advertising first thing which comes to our mind is photoshop .It all started in 1987 when Thomas Knoll ,a PhD student at the  University of Michigan creates a program Display which can display 256 grayscale images on 1-bit black and white display.But Mac couldn’t display gray scales levels properly ,but he solved it by simulating the gray-scale effect by a subroutine .He was a photgraphy enthusiast who adopted color and contrast balance and to make black , white and color prints from his dad together with their basement darkroom.

It was then this brother John Knoll who ordered a Macintosh II , the first color monitor .John Knoll was a visual effects supervisor at ILM .ILM mostly worked on visual effects for Lucas film. Thomas got hands on the new Mac and started his project Display .John working on Star Trek: The Next Generation got interested in the Display project and recommended Thomas to turn it into a refined fully-fledged image editer. They worked together on that project for 6 months and the new software was then renamed as Image-Pro in 1988.

Soon for distribution of the software Thomas renamed it again in the same year to Photoshop and the first license was sold out to a scanner manufacturer ,Barneyscan .Which then sold 200 copies of photoshop along with their scanners.They encountered pixel imaging application,photomac but its limited and poorly implemented features gave them no worries .Later John gave successful demos of Photoshop program to major companies Apple and Adobe. Adobe purchased the license in sep 1988 and was later introduced exclusively for Apple computers Macintosh (Mac OS 6.0.3)  in February 1990 .

Knoll Brothers changed not only their darkroom but also many enthusiasts  on the planet to light by their clicks.

Photoshop 2.0 included the Path feature, which allowed users to trim around an object easily and to save
that path for future use. This feature was added by a second engineer, Mark Hamburg, that Adobe hired
to work on the application. Adobe called Mark the “Path Man”. 2.0. He also featured rasterizing for Illustra-
tor files, support for CMYK colour which led to widespread Photoshop adoption by the printing industry,
and the Pen. 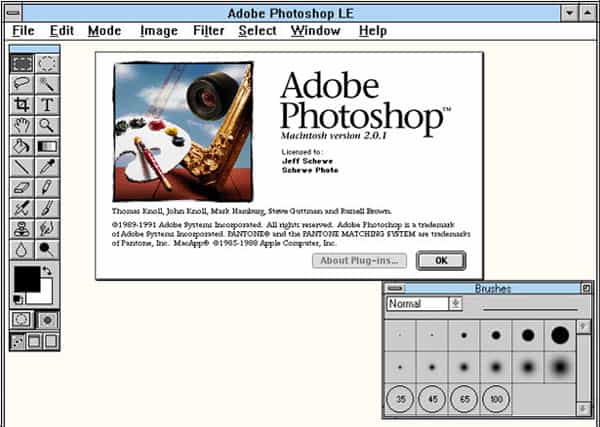 The initial Windows release had a “memory bag”, a bug which actually saw
Mark Hamburg offer to make house calls. The patched version was released as
2.5.1. Filters got their own menu in 2.5 as well. 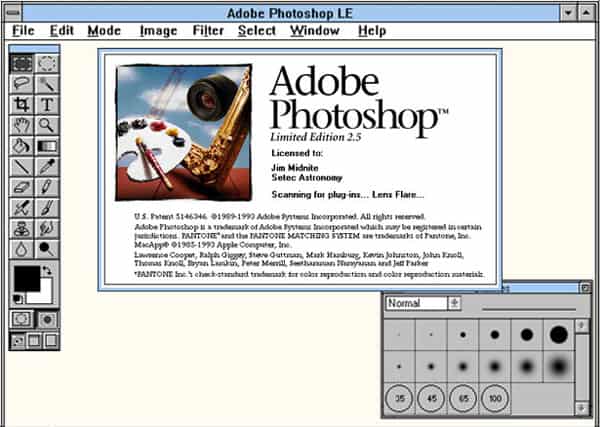 The big story for Adobe Photoshop3.0 was layers. Layers were and are a
lifesaver for any marginally complex design.

Prior to their introduction, designers would save different versions of
designs so that they could go back and grab them if needed; layers made this
practice redundant.

Layers are in individual slices of the image that go together to make the
final “sandwich” of the image. Thomas Knoll, the original creator of the program,
was responsible for their development. 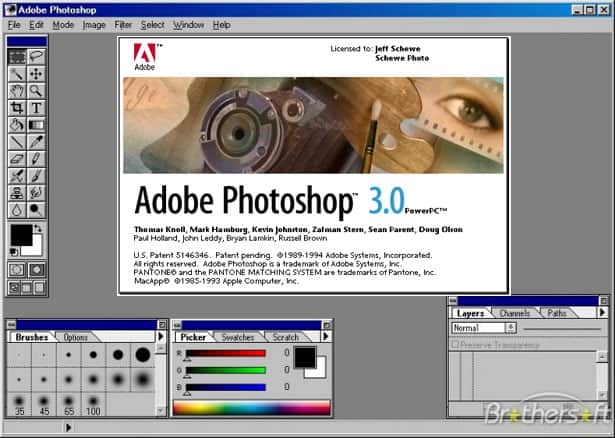 Macros or actions in Photoshop speak, allow you to map a series of
commands to one command. This allows you to perform the same operation in
much less time if you have a bunch of images to work on.

The most important change to 4.0 was the unification of the user interface
with other Adobe products, a feature which Adobe has stayed consistent with
right up to present-day incarnations of the program. 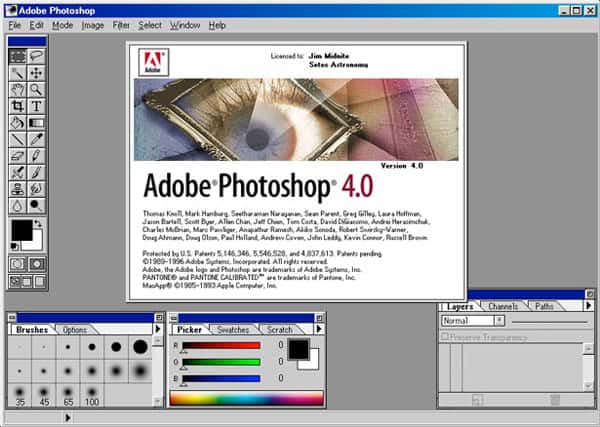 The two most important features released with 5.0 were editable type
and the ability to undo actions multiple times in the “History” palette. Color
Management made its debut with 5.0.

Like other major changes to Photoshop, it was greeted with equal parts of
praise and condemnation. 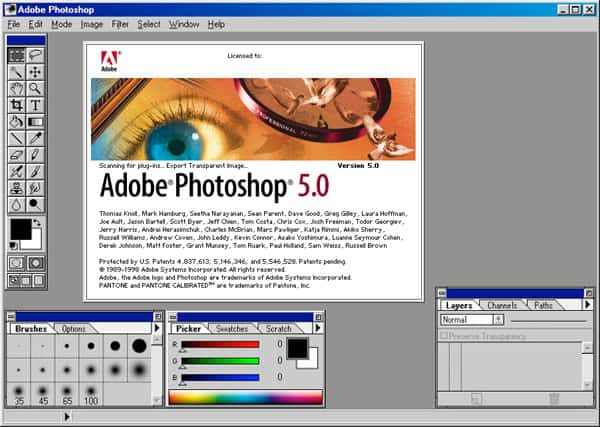 Photoshop 5.5 featured the huge time saver, “Save for Web”.

This feature allows those who choose it to save the image in a present
specifically designed for web use which allows the user to adjust image quality to
achieve a smaller image.

Version 5.0 had failed to take the Web into account with all of its other
major feature changes on the table. It was also bundled with Image Ready, a
stand alone program that was purpose-build to edit web graphics. 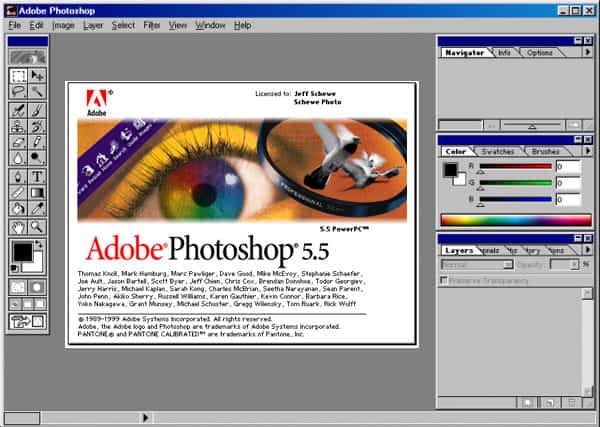 The layer styles panel made working with layers even easier in Photoshop
6. Vector shapes were also added in this release; the ability to draw vector shapes
such as arrows into a bitmap was lauded by users.

Multi-layer functions made their first appearance with version 6.0. The
Blending Options dialogue was also introduced which made blending various
elements of an image much easier.

6.0 separated the crop tool from the marquee tool, making it that much
easier to get to this commonly used command. 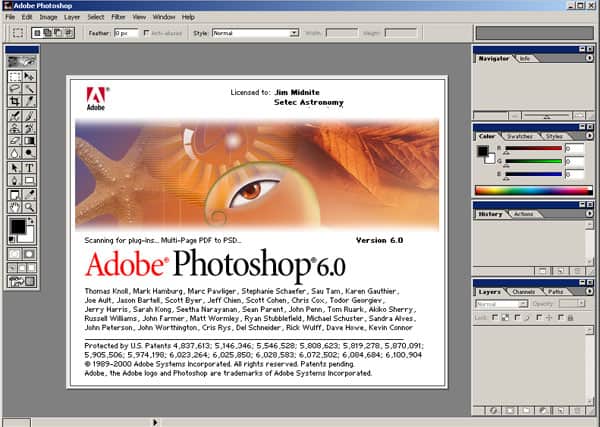 With the increasing complexity of the tools available to users, Photoshop
was risking losing a significant market share that didn’t understand or need some
of its more advanced tools.

In order to combat this, they released Photoshop Elements in 2001. The
new product was a success, and designers continue to recommend it to clients for
simple image resizing and other non-design tasks.

Version 7.0 introduced the healing brush and text that was fully vector- 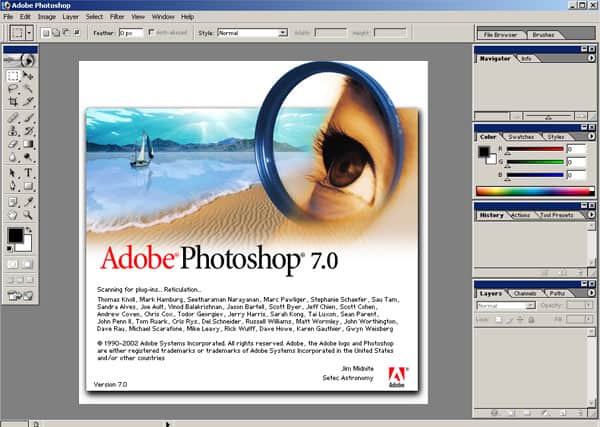 Photoshop CS was the first to employ the CDS (counterfeit deterrence
system) which recognized and refuse to allow duplication of paper currency.

Scripting support for various web languages, including JavaScript, was
also new to this release.

Layer groups were introduced with this version, which allowed various
layers to be grouped together for effects to be applied to some and not others. 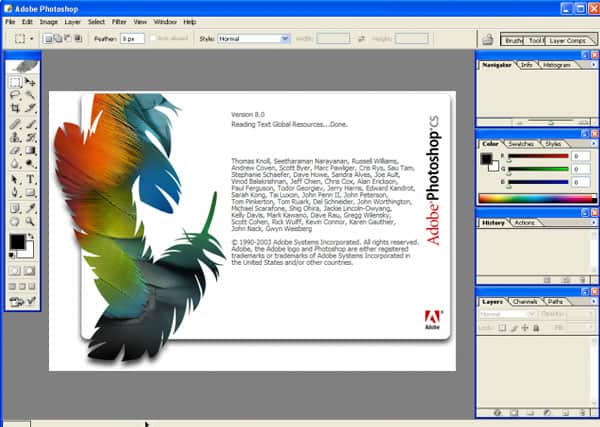 The red eye removal tool, previously exclusive to elements, was popular
enough to make an appearance in the core version of photoshop.

Smudging options and the ability to select multiple layers also added to
the functionality of Photoshop.

A faster load was probably the most noticeable feature of this 2007
release. It included fine tuning to a number of its existing tools rather than
focusing on new ones.

The most notable new feature was graphic optimization for mobile
devices, a feature which many web designers focusing on mobile design were
thankful for. 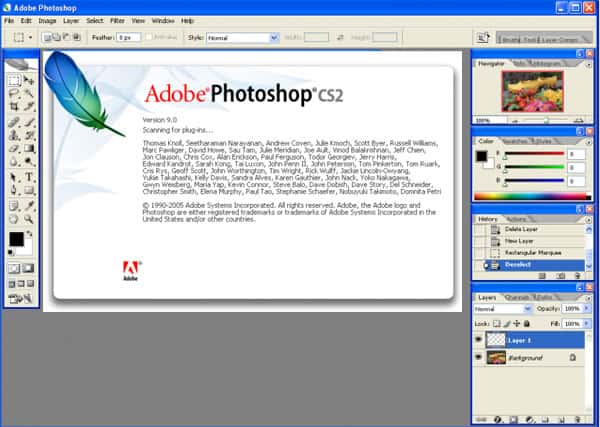 A faster load was probably the most noticeable feature of this 2007
release. It included fine tuning to a number of its existing tools rather than
focusing on new ones.

The most notable new feature was graphic optimization for mobile
devices, a feature which many web designers focusing on mobile design were
thankful for. 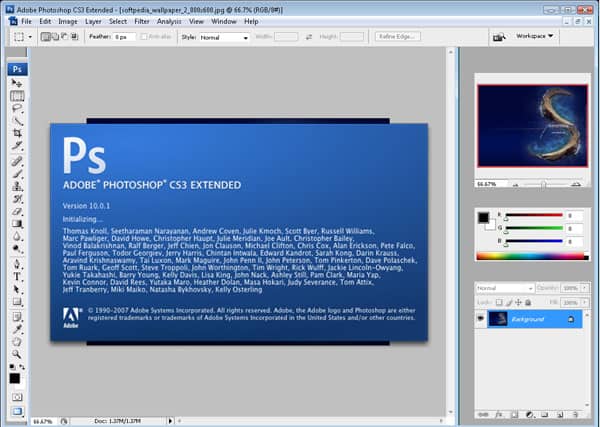 The smoother pan and zoom allowed for fast drilldown on the areas of an
image that you wanted to look at.

The Masks and Adjustments panel was added, making working with masks 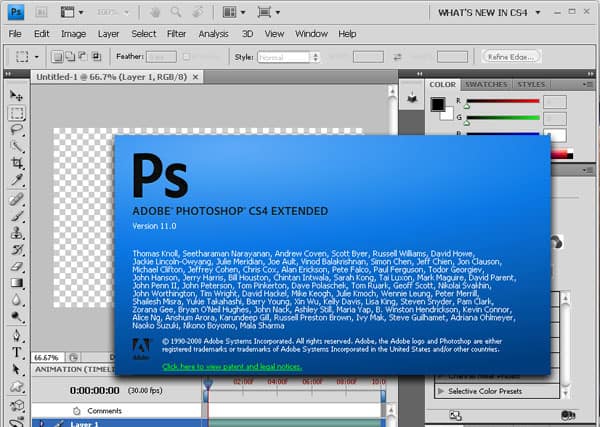 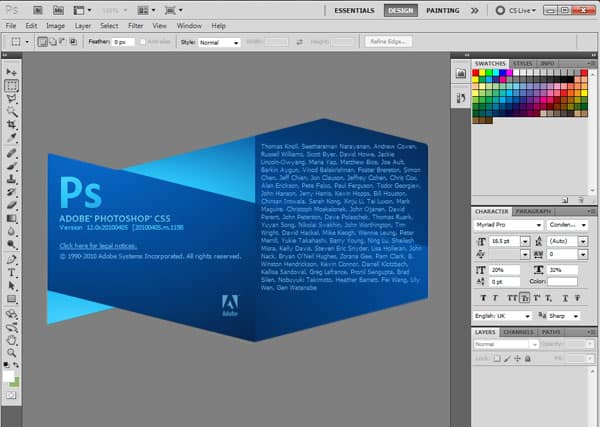