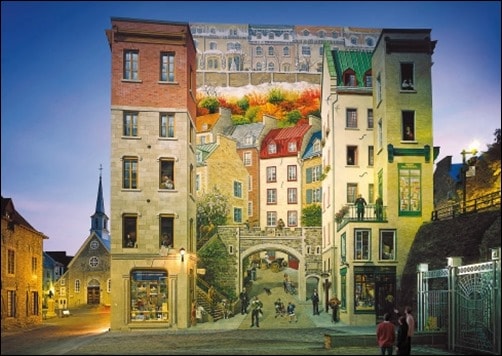 3D street art has become hugely popular, and it continue to amaze thousands of people around the world. This is demonstrated by the prevalence on offices, exhibitions, restaurants, houses and other structures. Good artworks always attract attention, no matter where they are displayed. Thus, whether they are made on paper, pavements or walls, they will inspire people as long as they are able to convey their messages in the right manner.

Street art and 3D paintings can transform the dull city facade into a three dimension environment. With the use of unusual paints, such as the silica based KEIM Mineral paint, artists can create murals that will last more than a hundred years. Some artists like Eric Grohe even use global imaging satellites, digital photographs and Google Earth to allow for the position of the sun and shadows. A 3D mural can take up to one year to complete.

In this post, I present 15 awe-inspiring 3D paintings for your inspiration. If you have seen stunning wall paintings that are not included in my list, let me know by adding your comments below. You may also fascinate your friends by sharing this post with them.

Fresco of the People of Quebec – MORE INFO

2.5 million people come to Quebec to admire this wall painting and have their photographs taken in front of it. This wall painting has become one of the symbols identified with the city of Quebec. 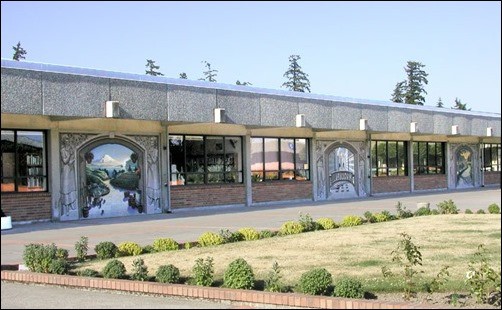 A women’s prison is by nature confining and restrictive. The imagery in these four murals was created not only to provide a visual and mental escape, but to inspire as well. The murals were designed to fit within the existing architecture of the prison courtyard. 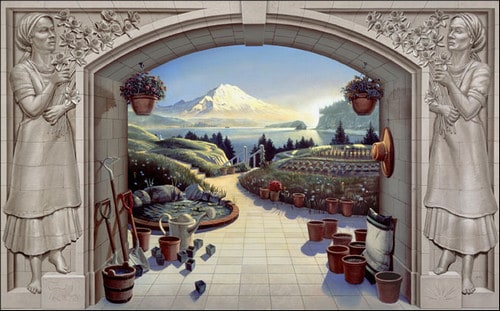 A gray concrete retaining wall once dominated this pool-side view behind a private residence. Painted classical architecture now frames a view out to the Italian Mediterranean Coast, a popular destination of the owners, and visually expands a confined environment. 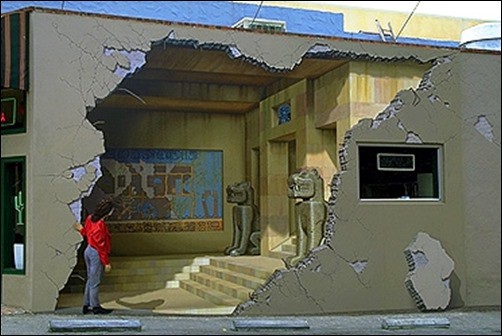 The mural Siete Punto Uno is located on Main Street in the town of Los Gatos, California. Los Gatos was one of the communities that suffered the most significant damage from the 1989 Loma Prieta earthquake. Considered the propitiator of earthquakes, the Mayan jaguar god (as represented in the mural) is grafted with the “cats” of Los Gatos to become one of the key metaphors of this concept. 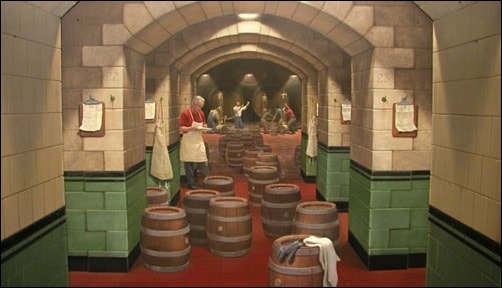 Artwork now humanizes and visually expands the cramped, industrial rooms of the Pilot Brewery at the Miller Brewing Company. Real objects such as hooks, aprons, and clipboards, which mimic their painted counterparts, were added to the surface of the murals to enhance the illusion. The design and materials had to accommodate the warm, humid environment as well as the frequent exercise of hosing down the floor with a mild chemical solution. 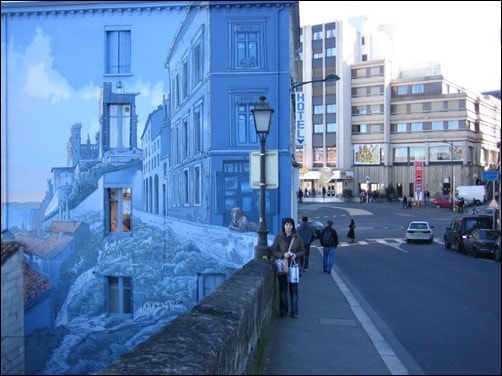 The paint is conceived to create a perspective effect and was done by a French comic artist. 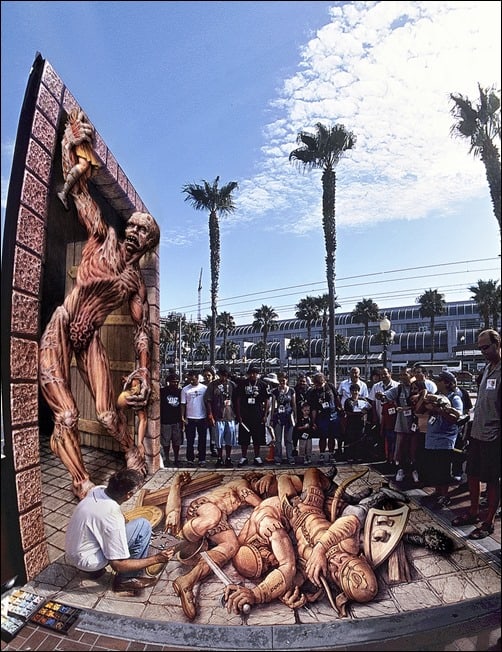 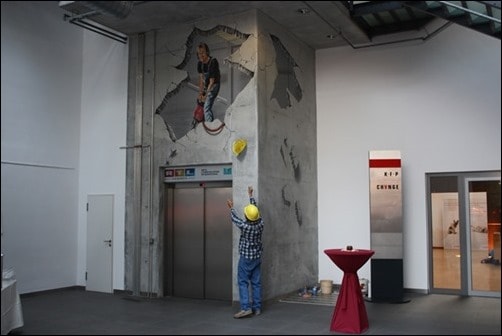 A real estate company is celebrating the 25th anniversary of their object. The 3-d artist works on concrete in the atrium, Frankfurt.

Rainforest on the Thames – MORE INFO 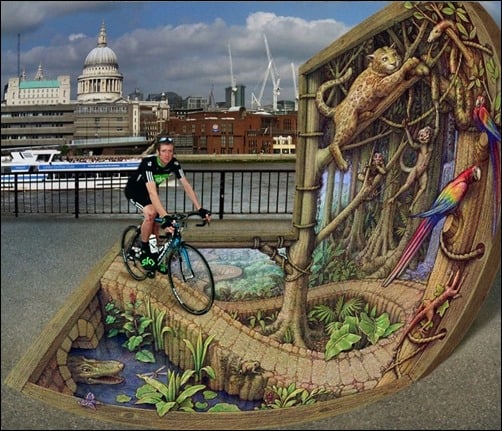 The Dirt on Bishop – MORE INFO 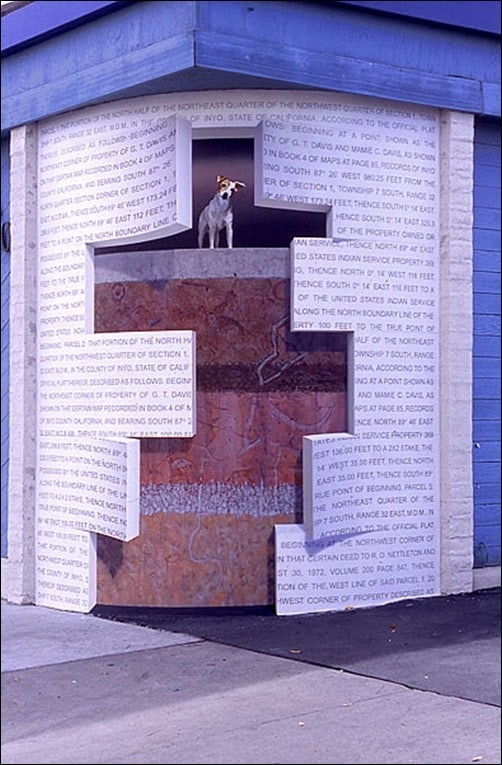 Inscribed with a land title, the wall-tablet unwraps from the curved packed soil like the peel of an orange. This layered core sample of Bishop earth represents a sedimentary survey of the town’s heritage. 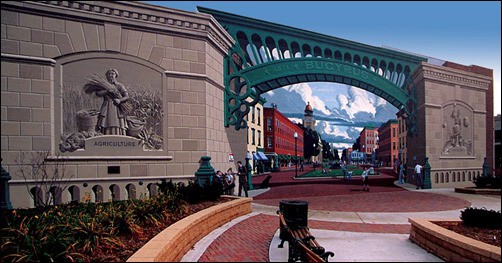 Dominating the main square of town, this once gray, soiled wall and gravel parking lot have become both a dramatic entrance to the city as well as a backdrop for numerous concerts and civic events. Over 80 local citizens posed for the figures in the mural, which depicts this same square early in the last century. 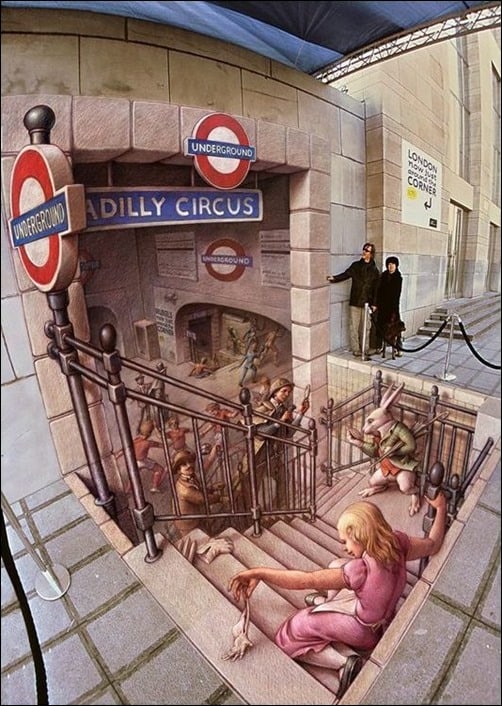 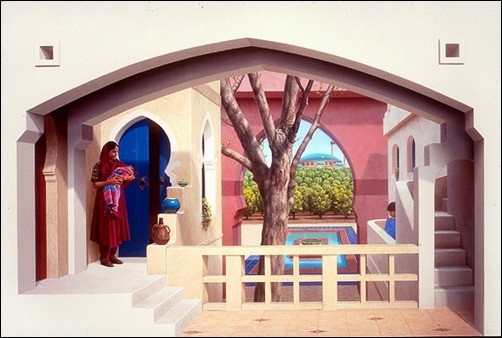 Children can cool off and play in a public fountain, climb the courtyard tree, or smell the sweet fragrance of a Florida orange. Using the illusionary painting style, arched entrances open into a world of Moorish architecture with a Southern Florida slant. The colorful approach to this mural project is not unlike the rest of the building’s Moroccan theme — not to mention the Opa Locka region.

Christ appears to float off the canvas in this mural commissioned to celebrate the 100th anniversary of the church building. Special attention was given to the perspective, since the viewing angle is from the floor below. 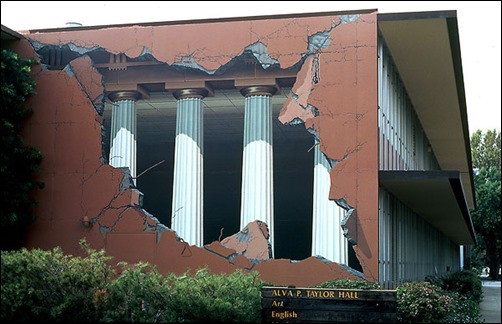 This Mural has been a landmark in downtown Chico, CA and has set a creative tenor for the community and its visitors.